Retro mobile or not?

A retro phone, as opposed to a retro mobile is a potentially different affair. Telephones began their life as wonderfully intricate looking fixtures on walls, with a separate mouth and ear piece. Later they would combine the two into a handset, then they were fitted with a dial disc, later a keyboard and yet later a screen – a state in which they have existed since. A homage to any of these past incarnations of a phone would surely be a retro phone. But a retro mobile, alas, has less of an illustrious history to draw upon: there's today's smartphone phase and yesterday's bricks. Hardly a tempting starting point for a retro mobile. But what if things aren't taken quite so literally?

What if we look at the retro mobile as a device that doesn't necessarily need to bear resemblance to it's bricky ancestor, but one that can draw upon the rich history of its kin, the original telephones. Suddenly, the possibilities are more appealing. Suddenly a stylish fusion, a retro mobile, that takes the retro from regular telephones and the mobile more literally, a somewhat anachronistic, yet charming combination of the two worlds, becomes a possibility.

Such a phone could possess mobile (wireless use) characteristics paired with the historic charm of a dial disc phone in its classic body, could combine the sound of a real metallic bell with modern technology: a retro mobile in which modern technology is clad in an elegant retro phone case.

So what would a retro mobile with a dial disc and a metallic bell look like? In short: like this. 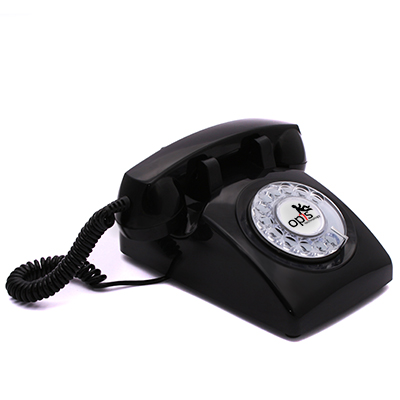